Join Canada’s Balladeer Wiz Bryant as he Travels This Land exploring Canadian history through tales of adventure, courage and compassion in story and song.

In this episode Wiz tells the tale of a communication tower rigger and the blue collar workers that are apart of Canada’s Telecommunication Industry. 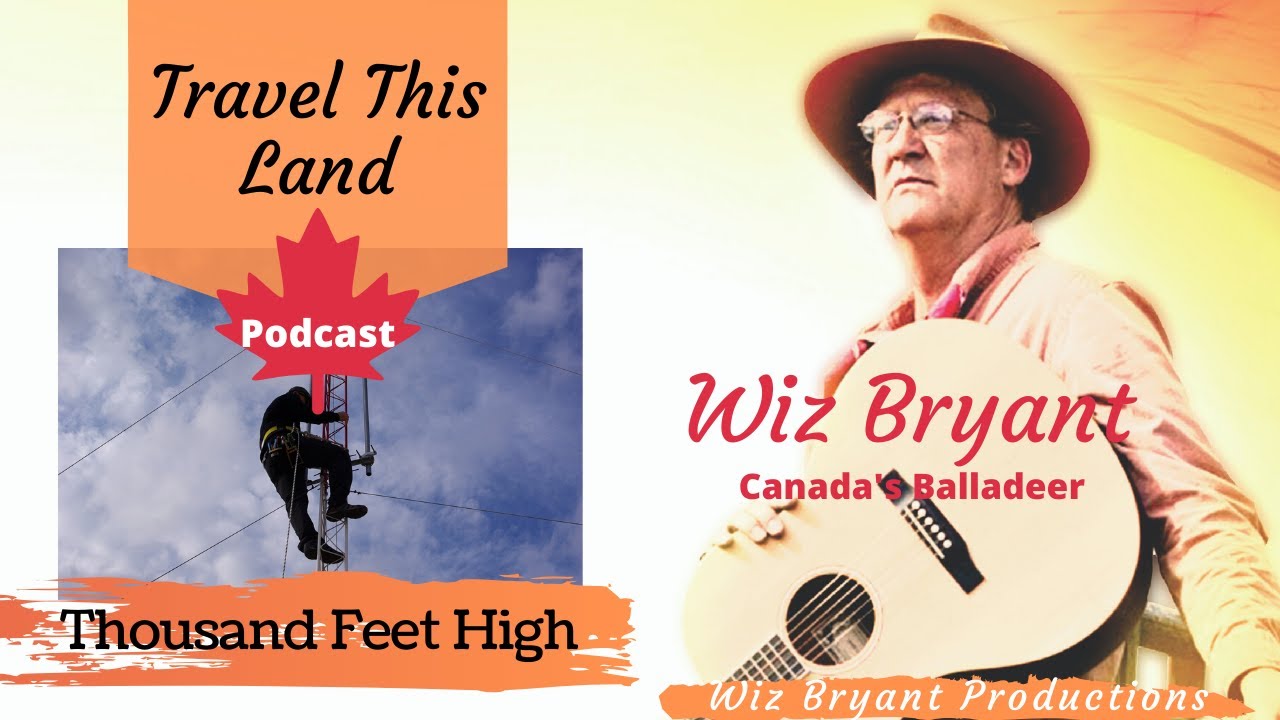 Announcer: It’s time to Travel This Land with Canada’s Balladeer Wiz Bryant. On today’s program Wiz takes a look at the growth of Canada’s telecommunications with a tale of microwave towers and riggers a thousand feet high.

Wiz Bryant: I was sitting in a coffee shop in Huntsville, Ontario. When I met him, I had just finished singing the Stompin Tom song, When the Bridge Came Tumbling Down, about steelworkers, who were killed building the Second Narrows Bridge in Vancouver in June of 1958. This young man walked over to my table and asked if he could join me.

There were tears in his eyes. It turned out that he was a rigger and worked on the transmission towers for Telecomm Canada.

And the previous week a friend of his and fellow rigger had plunged 400 feet to his death while working the towers.

Wiz Bryant: The Stompin Tom song had spoken directly to this young man’s heart because it was about the men and women involved in his work because it recognized their courage and the danger they face daily. As I listened to him, talk, it reaffirmed my belief in writing and singing songs about real life. About this country and its people, and the many unsung stories still to be told songs of courage and danger about people providing us with modern services that are so easy to take for granted about the people who keep the country operating.

Sometimes more often than we would like to imagine at the cost of their lives. As this young man continued to tell me about his work and what it meant to him. I couldn’t help thinking of another courageous Canadian Alexander Graham bell. I imagined him sitting in that coffee shop with us and wondered what he would have to say to this young man.

It was August, 1876 when Bell received the first long distance phone call over a 13 kilometer line that he had stretched between Branford and Paris, Ontario. This was the incredible event that began our Canadian obsession with communication, and as brought us from those early days of a telephone to our present information age, where now, in addition to voice transmission, we have complete computer banks of data sold over our telecommunication lines.

Would Bell be amazed. I wonder if he would.

Wiz Bryant: Anyone who has had the opportunity  to travel across this land will no doubt understand why Canadians continue to be obsessed with communication technology and that perhaps. Why we continue to produce communication geniuses like Alexander Graham Bell, Reginald Fessenden, the inventor of radio, Sanford Fleming and others like them. With a population of less than 30 million and thousands of miles of rugged geography.

Only telecommunications. Permit us to overcome the constraints of time and distance. Only our incredible communication systems provide us with the means to end our isolation and give us the resources to be a nation. Most of us have seen the lines of transmission towers that linked us from sea to sea cutting across a farmer’s field or carving a swabbed through a thick forest of trees.

These are the high frequency microwave towers that my friend, the rigger, maintains. Towers that send and receive signals equipped with electronic switchers, for wire loop connectors and other devices that I would never claim to understand, but which are this man stock and trade as he works away, hundreds of feet above the ground.

Did you know that communications technology is the cornerstone of Canada’s industrial strategy? Well, I didn’t either, but think about it. It certainly makes more sense than considering ourselves as just a supplier of not so endless raw resources to the other affluent industrial countries of the world.

From the growth and development of communication, we have perhaps our greatest opportunity to seek advantage in an increasingly competitive world economy. Why? Because information is power and communications technology is the deciding factor in the prevailing influence and distribution of that power. Invading armies first targets or the occupation of power installations, broadcast facilities, and all of those communication technologies that put us and keep us in touch with each other.

Information is the wealth of our time, not banks, but vast computer banks of data and minds and voices transmitting and receiving across the miles. And yet, in spite of all this, and in spite of the contribution of people like media philosopher, Marshall McLuhan, also a Canadian, by the way, we still have a world were over 1 billion people and growing can neither read nor write.

A world where 75% of the world’s telecommunications are found in only eight of the world’s 175 countries. It appears as though we still have a long way to go.

The rigger I met in that coffee shop in Huntsville, Ontario. Is a vital link in our communication systems. It is his skill that maintains the installation and servicing of our systems that, and the skill of his fellow riggers, like the one who fell to his death a week earlier, and perhaps the one who was killed today.

Somewhere out there in this vast country of ours, just doing their jobs, keeping us all in touch with each other, providing us with power and information, the vital link, still a human being, not a computer, not a robot, just a young man full of life with a tear in his eye over a song.

Wiz Bryant: Our huge corporations that manage and continue to develop our communications technology are corporations of highly skilled and intelligent people that continue to work and develop new communications. Hopefully their efforts will help to make our world and increasingly safer place to live. Hopefully their advancements in technology will help to solve our political and economic problems to give us all more informed participation in a democratic process, but there is danger to the danger that they will supply us with endless facts, without wisdom with the powers of instant destruction, rather than a force for good.

With communications only between the rich and the powerful, rather than everyone, the so called little people like my friend, the rigger and the part they play in all this are too often overlooked, forgotten industrial deaths are not sensational enough to make the news. And the rewards of daily heroism are to be met with a paycheck only.

Not until our systems break down till the lines are out or the power fails, do we tend to remember those, like the rigger and yet in listening to him tell his story. I sense that he had no regrets. This fellow truly loved his work. He was proud of what he did each day. We shook hands and parted, but from time to time, I think of him scaling those transmission towers, providing the vital human link in our information age, alone against the sky, a thousand feet high.

Announcer:  You’ve been Traveling This Land with Canada’s singing storyteller, Wiz Bryant, please feel free to write to his with your comments. We’d be delighted to hear from you. Thank you for listening. Join us again next time for another fascinating Canadian tale in story in song.

As we continue to Travel This Land.