Join Canada’s Balladeer Wiz Bryant as he Travels This Land exploring Canadian history through tales of adventure, courage and compassion in story and song.

In this episode Wiz tells the tale of the fateful Franklin Expedition of 1845 as it explores the Polar Sea searching for the fabled Northwest Passage.

Features the song Voyage Of The John Franklin from Wiz Brant’s Album Spirit Of The North. 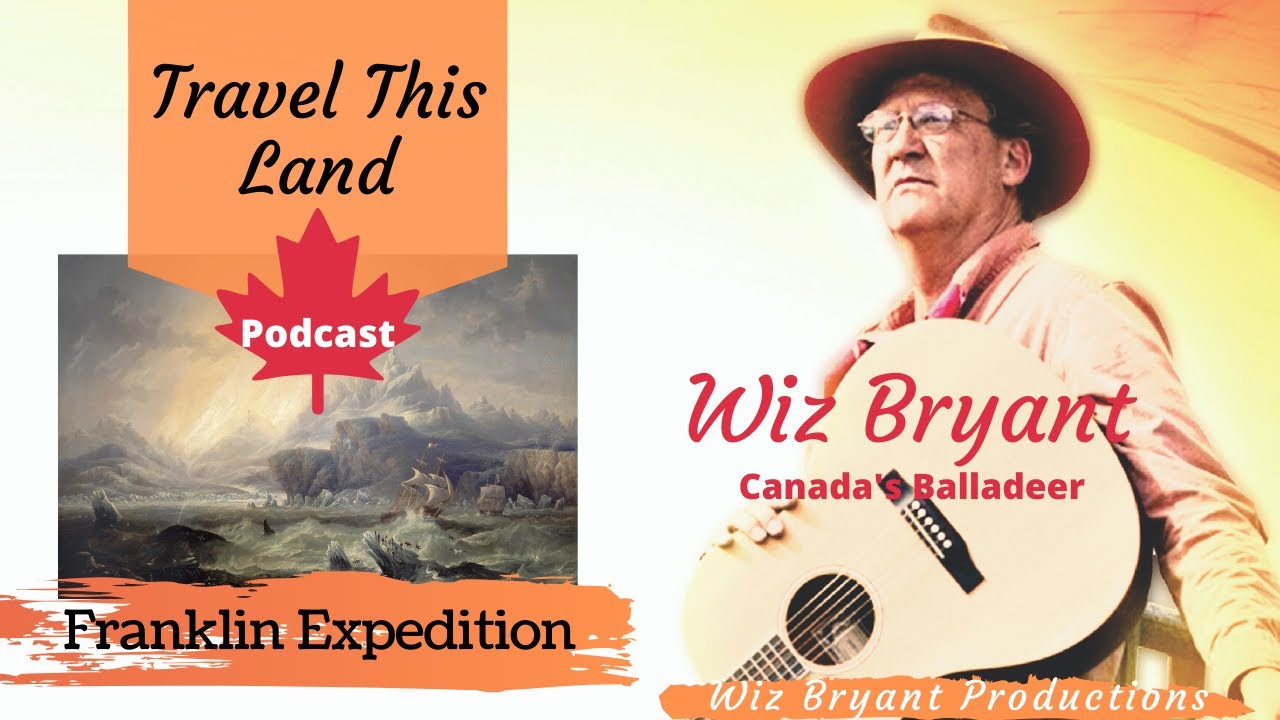 Announcer: It’s time to Travel This Land with Canada’s Balladeer Wiz Bryant. On today’s program Wiz takes us on a journey through Canada’s fabled, Northwest passage, where the story of the Arctic voyage of John Franklin.

Wiz Bryant: It may be hard for us to imagine today, but the search for a sea route across the North, from the Atlantic to the Pacific was a major obsession with European Mariners for several hundred years. It has come to be known as the Northwest passage. If you get out a map and look at Canada’s Arctic region, look at the place names on the islands and the waterways.

You’ll be amazed at how many are named after early Arctic maritime explorers. There’s Frobisher Bay. There’s Davis Strait, Baffin Island, all of these and more are the names of Arctic explorers. The most fascinating story associated with the search for the Northwest Passage would have to be the Arctic voyage of Sir John Franklin.

Wiz Bryant Singing: We are the men of Sir John Franklin, noble men of the Queen’s navy. Searching for the Northwest Passage, follow the tide to the polar sea.

Wiz Bryant: Franklin was a Navy veteran who fought in the Napoleonic wars. He was with Lord Nelson at Trafalgar, which is one of the greatest sea battles in British history. Franklin had long been obsessed with discovering the Northwest passage. He made two trips into the Arctic by Overland routes and by 1845, he was ready to attempt a sea voyage across the Arctic ocean.

In 1845, Franklin was already 60 years old and I’m sure there were those in the British Admiralty who felt that he was too old for such an arduous undertaking. He was very confident of success and he was able to convince the British government that he was the best man for the job. Well, he certainly had the experience and the credentials. Franklin studied the existing Arctic maps and determined that his expedition would be the one to finally find the passage.

He had two superbly equipped ships called the Erebus and the Terror. For 1845, these ships were state of the art. They were equipped with steel on their bows and small steam engines to assist them in cutting through the ice packs, as well as their sails for open water and wind.  His crews were handpicked veterans, the best of the Royal Navy, they took with them enough food and supplies to last for three years.

This is the length of time they determined would be required to complete their historic voyage. They had a lot of canned food, which may have been responsible for some lead poisoning later on. They set sail with the best scientific and technological equipment and knowledge of their time, as well as their military training and Navy experience.

Of course, there were no women on the ships at this time, the wives and lovers were left at home to await their hero’s return.

Wiz Bryant Singing: We left the Atlantic coast of Greenland heading port the Pacific side cut our way, to Baffin Bay, our lovers’ prayers. They were our guide. Hear the song of the crackin’ ice flow. Wait for the waters to run free. Spend three year with the arctic ladies searching for the Western sea.

Wiz Bryant: I think of Franklyn and his man as sort of early astronauts. They took the best of what was available at the time. And they sailed off into an unknown frozen world. There would be no communication with the outside world for three years. It seems that the first year of the voyage went extremely well.

Franklin successfully navigated Davis Strait and sailed up Lancaster Sound, to Beachy Island. They spent the winter locked into the ice and it’s here that the first two seamen died. They were buried in the Cairn of stones. And as recently as the late 1980s were exhumed by some Canadian scientists, the bodies were in a remarkable state of preservation.

The Northern Arctic climate has a way of preserving things almost as if they were in a time capsule. This study has provided us with a unique opportunity to examine more closely the life and times of Franklin’s voyage and possibly provide more evidence into their ultimate tragic end. When the ice packs broke up in the spring, Franklin sailed on, as he reached King William Island in the Western Arctic, he had a decision to make either sail South down a passage that the current maps suggested was a dead end or over the top of King William Island.

Franklin chose the Northern route. And unfortunately, this was the fatal error that sealed their fate. The Erebus and Terror were soon held fast in the ice packs north of the Island. Franklin was not discouraged. They were prepared to spend their second winter there, expecting that the ice would break up in the spring.

Through the long dark winter, the men engaged in scientific research, amateur theatricals, and generally maintained their discipline and morale. Lieutenant Gore took out an overland expedition to explore King Williams land as they called them being uncertain, whether it was a peninsula or an Island. In later years, a small stone cairn was discovered with a note inside left by Gore.

It was dated May 28th, 1847, and stated that all was well with Franklin’s expedition. In fact, Franklin was very close to reaching his goal. On the other side of King Williams Island lay the Beaufort Sea and clear passage to the Pacific, but all was not well, the ice packs North of the Island did not melt with the summer warmth and the  Erebus and Terror remained trapped in the ice.

As the men prepared to endure a third winter trapped in the ice Franklin and five others died. The situation was now desperate, and the man had lost their leader.

Wiz Bryant:  As the winter wore on the conditions on board, the ships rapidly began to deteriorate the food stores were badly depleted and the bone chilling cold had begun to wear down the men’s remaining reserves. Their ships had become a death trap.

Wiz Bryant Singing: White flares in the sky a dancin’ over land to Backfish Bay. Buried by when we buried Franklin the cairn stone, you’ll find one day. We are the men of Sir John Franklin Noblemen of the greens may be searching for the Northwest Passage. Follow the tide to the Polar Sea.

Wiz Bryant: The officers made a decision. They would leave the Erebus and Terror and travel over land across the Island in the hopes of reaching the mainland and then South to safety. Unfortunately, the expedition seemed totally unaware of how to survive outside their ships. They had learned nothing from the Inuit, the native peoples of the Arctic, neither how to build ice houses, hunt the seals and walrus for food and clothing or any of the other skills, which would have most likely saved their lives.

Instead, they left the ships with two heavy wooden sledges filled with the remaining supplies and began to pull them by ropes across the Arctic ice. Search parties in later years, heard stories from the Inuit about these last desperate days of Franklin’s expedition’. Stories of the man dropping in their tracks one at a time as they pulled the sledges, some of them did reach the mainland at Back Fish Bay. Searchers later discovered numerous skeletons there. And there was some evidence that in their last desperate acts, the man had resorted to cannibalism. Thus ended the tragic Arctic voyage of sir John Franklin.

Ironically, it was his failure to complete the trip through the passage that brought about its discovery by Captain McClure who entered the passage from the Pacific side in search of Franklin. In 1940  Captain Larson in the RCMP ship, the Saint Rock was the first mariner to complete a maritime voyage of the Northwest Passage.

He sailed from Vancouver up Bearing Straight across the Arctic and down to Newfoundland. Then he turned around and sailed back the way he came, completing the passage, both ways the Saint Rock can be seen today in Vancouver. It is a small craft compared to the ships Franklin’s man, sail to their doom back in the fateful year of 1845.

It is easy to think of Franklin’s expedition as a failure, but in fact, it was perhaps a tragic, but ultimately heroic step in pushing back the frontiers of yet undiscovered worlds.

Wiz Bryant Singing: Will try it damn hard to keep our minds. James Reedy is a good ice master. He says the Straight is sure to yield, but Oh my God, how its growing colder and a soldier can desert this field.

Announcer:  You’ve been Traveling This Land with Canada’s singing storyteller, Wiz Bryant, please feel free to write to his with your comments. We’d be delighted to hear from you. Thank you for listening. Join us again next time for another fascinating Canadian tale in story in song.

As we continue to Travel This Land.

Wiz Bryant Singing: Voyage of The John Franklin from his Album Spirit Of The North